New ways of thinking and talking about climate change

As regular readers will know, I am a huge fan of Krista Tippett, MDiv, creator and host of the radio program and podcast, “On Being.”

The show’s guests challenge my thinking, give me suggestions about new books to read – from physics to business – and help to center me for the coming week in a world that can feel out of control.

Last week, Tippett talked with atmospheric scientist, Katharine Hayhoe, PhD, professor of political science and director of the Climate Science Center at Texas Tech University. Hayhoe is not just an acclaimed scientist but one who bridges science and religion; she serves as the climate ambassador for the World Evangelical Alliance and recently was appointed chief scientist of the Nature Conservancy. Her new book is “Saving Us: A Climate Scientist’s Case for Hope and Healing in a Divided World.” The discussion was fascinating, partly because it framed climate action not simply as for or against, believe vs. disbelieve, but as a topic about which there are many subgroups of people who hold different degrees of understanding about and acceptance of the evidence. 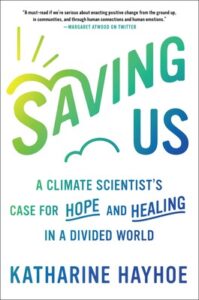 I was struck by the way Hayhoe integrated psychological concepts, such as agency, efficacy and message framing, and the intersection of religion, politics and science. She characterized climate scientists as the physicians of the planet and reflected on the need for rational hope. There are actions we still can take, that are in our control, to save the planet, and she gave examples of steps that cities – such as Houston, surprisingly – are taking, to control greenhouse gases.

Hayhoe regards herself as a bridge between science and religion, and she spoke about how she is working with evangelical congregations to understand the relationship between climate and Christian faith and practice. For example, the Bible’s frequent references to taking care of the least of us fit with the recognition that climate change will hurt most those who have least. To paraphrase a point Hayhoe made in a TED talk, which now has nearly 4 million views: building support for climate action depends on the willingness of ordinary people (including those who work in the sciences) to begin to talk from the heart rather than from the head about why climate change matters to us and how it already is affecting us – to connect the dots — and to base such conversations on genuinely shared values. With the 26th UN Climate Change Conference of the Parties (COP26) starting Sunday, Oct. 31, in Glasgow, it is a good time to think and talk about what each of us can do about climate.

The conversation between Tippett and Hayhoe reminded me yet again that, in public health, we must find ways to transcend the boundaries between people if we are going to solve the biggest threats of our time, including climate change. I encourage you to listen to the show or read the transcript (both options available at this link). Here is some music to accompany the discussion.
Barbara