The most recent issue of the NEJM contains several articles that speak to the extraordinary times we are living in and how medicine and public health are converging on a similar path.

I doubt that anyone would call the New England Journal of Medicine (NEJM) a radical magazine. It is one of the most respected peer-reviewed medical journals in the world, one that increasingly includes public health topics. The October 8 issue of the journal contains several articles that speak to the extraordinary times we are living in and how medicine and public health are converging on a similar path.

The line between public health and medicine blurs as we face conditions such as COVID-19 in which the social determinants of health are so influential. Risk of exposure is greater for essential service workers and people living in overcrowded conditions, and outcomes are worse for patients without health insurance and those who have pre-existing health conditions. That a superspreader event at the White House infected many, including the president and a number of other attendees, does not negate the adverse consequences of the pandemic experienced by the poor and people of color. The fact that the president got elite care only sharpens the distinctions between the 1% and the many, but especially those who are people of color, poor and otherwise marginalized.

Our government’s “consistently inadequate response” to the pandemic prompted the editors of the NEJM to write that U.S. leaders had turned a crisis into a tragedy costing more than 200,000 American lives (215,000 as of Tuesday morning). They said,

Some deaths from Covid-19 were unavoidable. But, although it is impossible to project the precise number of additional American lives lost because of weak and inappropriate government policies, it is at least in the tens of thousands in a pandemic that has already killed more Americans than any conflict since World War II.

The editors then communicated an unprecedented conclusion:

Reasonable people will certainly disagree about the many political positions taken by candidates. But truth is neither liberal nor conservative. When it comes to the response to the largest public health crisis of our time, our current political leaders have demonstrated that they are dangerously incompetent. We should not abet them and enable the deaths of thousands more Americans by allowing them to keep their jobs

In the same issue, the case for reparations

Mary Bassett, MD, MPH,  Director of the FXB Center for Health and Human Rights and  FXB Professor of the Practice of Health and Human Rights at Harvard, gave the 7th Annual UNC Health and Human Rights Lecture last week, in a virtual talk co-sponsored by the Gillings School, titled, “How Pandemics Show Us Who We Are: Race and Risk in the United States.” She spoke about the disproportionate burden of COVID-19 borne by the poor and people of color. She said that the only way to right the wrongs of slavery and its long reach on the health of Black Americans is to pay reparations. She and Sandro Galea, MD, DrPH, dean and Robert A. Knox Professor at Boston University School of Public Health, wrote in the same (Oct. 8) issue of NEJM: 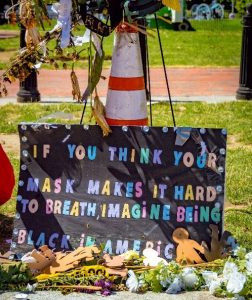 There has not been a single year since the founding of the United States when Black people in this country have not been sicker and died younger than White people. A growing consensus highlights a structural basis for these preventable disparities — structural racism — clarifying the need for a structural solution. Black reparations are one such solution and, we believe, a long-overdue approach to persistent Black–White health disparities.

It is left to those of us in medicine and public health to argue that now is the time to act, because equity is not simply about repair in cash or in kind. Addressing the Black–White wealth gap through reparations is about saving lives. By bringing attention to the health benefits of addressing this gap, we can help shift a national conversation about reparations that often becomes mired in blame and accusation to one that centers the critical importance of health in the United States.

Talk is easy, but voting has never been more important. I voted early. Whether early or the day of the national election, please vote.

Links to state-specific sites and tips for North Carolina voters are on our School’s Ready, set, vote! web page.