On Saturday, June 19, we encourage everyone to acknowledge and recognize the meaning of Juneteenth.

Kauline Cipriani, PhD, Associate Dean for Inclusive Excellence at the Gillings School, is co-author of this blogpost.

June 17, 2021 was a momentous day. President Biden signed into law the establishment of June 19 as Juneteenth National Independence Day, the 12th federal holiday, and the first new national holiday since Martin Luther King Day was established in 1983. Official recognition of Juneteenth was passed overwhelmingly by Congress. The legal marking of Juneteenth is, itself, a public statement of a truth that many in this country want to deny — that we were a country that began with slavery in 1619. Inevitably, it follows that we must begin to come to terms with the consequences of our origins, and the wide-reaching impact that endures today.

The word “Juneteenth” is a portmanteau of June and nineteenth. Also known as Emancipation Day, Freedom Day, Jubilee Day and Liberation Day, Juneteenth commemorates the day in 1865 when freedom finally came to the more than 250,000 enslaved people in the westernmost Confederate state of Texas. 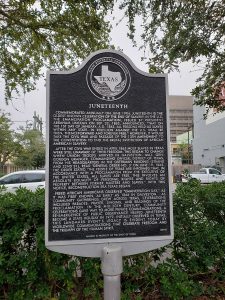 This historical marker in Galveston, Texas, commemorates the reading of the Emancipation Proclamation by Union General George Granger on June 19, 1865.

Toward the end of the U.S. Civil War, Union General Gordon Granger, with some 2,000 troops, arrived in Galveston Bay and announced that, in compliance with President Lincoln’s 1863 Emancipation Proclamation, chattel slavery was outlawed in Texas. A blogpost by the National Museum of African American History and Culture explains, “Even though the Emancipation Proclamation was made effective in 1863, it could not be implemented in places still under Confederate control.” Ratification of the 13th Amendment in December 1865 would formally abolish slavery in the United States, and President Andrew Johnson would declare a formal end to the Civil War in August 1866.

From its Galveston, Texas origin in 1865, the observance of June 19th as the African American Emancipation Day has spread across the United States and beyond. Today Juneteenth commemorates African American freedom and emphasizes education and achievement. It is a day, a week, and in some areas a month marked with celebrations, guest speakers, picnics and family gatherings. It is a time for reflection and rejoicing. It is a time for assessment, self-improvement and for planning the future. Its growing popularity signifies a level of maturity and dignity in America long overdue. In cities across the country, people of all races, nationalities and religions are joining hands to truthfully acknowledge a period in our history that shaped and continues to influence our society today. Sensitized to the conditions and experiences of others, only then can we make significant and lasting improvements in our society.

This year, Juneteenth is an opportunity to reflect on the arc of history in this country, an arc that included slavery from its earliest days, and to consider how the legacy of slavery continues to exert pain and inequities even today—in health care, criminal justice, education, housing, transportation and other areas of life. The COVID-19 pandemic revealed and reinforced these inequities. The deaths of George Floyd, Ahmaud Arbery, Breonna Taylor and others galvanized broad multi-racial coalitions to action around the United States. Companies, organizations, governments and campuses are seeking to reckon with the past and set us on the path to a fairer, more equitable future.

Reckoning with the past means owning it and recognizing the ways the present is held hostage to the past until we free ourselves from its shadows. Such attempts could include honest and serious efforts to rectify the past through better understanding that history, replacing names associated with slavery and segregation on buildings, reparations, and preventing or abolishing policies and practices that discriminate because of race/ethnicity and other personal identities.

Juneteenth is more relevant today than ever before. Each of us can do many things in our daily lives to disavow practices and policies that prevent people from thriving—taking time to learn the rich and sometimes reprehensible history of this country; donating to causes like Black Lives Matter; supporting communities of color and committing to days of service; participating in virtual and in-person Juneteenth celebrations in Chapel Hill/Carrboro or other communities; engaging professional development focused on anti-racism; and self-reflection. Here at Gillings, we held our annual Inclusive Excellence Symposium this week, with many faculty and staff members participating.

We can tell our state and federal elected officials that we do not support legislation and policies that restrict schools and universities from teaching all our history, including slavery, segregation and systemic racism. We can recommit to dismantling structural racism, wherever it occurs, including at Gillings. We are optimistic that change can come, and that improved public health will be one of the outcomes.