A celebration of and tribute to a mensch

The Department of Epidemiology at the Gillings School recently celebrated and paid tribute to Professor Steve Meshnick, MD, PhD, in a remarkable Zoom event with more than 200 participants from all over the world.

Mensch (Yiddish: מענטש‎ mentsh, cognate with the German word Mensch meaning a “human being”) means “a person of integrity and honor”. … According to Leo Rosten, the Yiddish maven and author of The Joys of Yiddish, a “mensch” is “someone to admire and emulate, someone of noble character.”

Many who could not participate contributed heartfelt messages about Dr. Meshnick’s impact on infectious disease research, social justice, music and their lives. Through the comments people made and the stories they told, we gained a deeper understanding of what it means to be a superlative mentor, faculty member and wise person — a mensch, as people repeatedly called him. Dr. Meshnick is a great mentor, a highly accomplished researcher, educator and musician, and a beloved family member and friend. 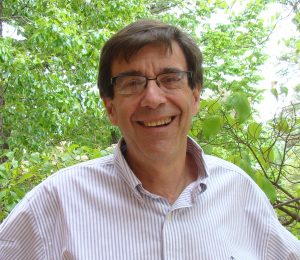 The best mentors — and Steve is one of the best — allow themselves to be totally in the moment in their interactions with mentees. Rather than focusing on their own needs, they look at their mentees’ lives and work from their mentees’ perspectives. One former mentee after another extolled Dr. Meshnick’s innovation, creativity, commitment to social justice and fairness, and to what was best for the mentee. They said he genuinely listened and provided direct feedback they could use to improve. When they ran into setbacks, he helped them work through them, and he did not abandon them. He continued to be there for them. They solved problems together, did fieldwork, reviewed data and wrote papers. He treated them respectfully. They also had fun, forming and nurturing career-long relationships, collaborations and friendships in the process. Several former mentees who were minority students spoke of how he treated them equitably and with complete respect.

Recently, Dr. Meshnick was selected to receive the school’s highest award for mentoring, the Larsh Award. Here are excerpts from three of many nomination letters submitted. 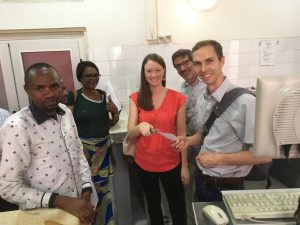 Research colleagues spoke fondly and respectfully of Steve’s skill as a researcher, his engagement with the people living in countries where he worked, his commitment to nurturing research teams, his love of solving problems and his loyalty to collaborators. One speaker showed a network map based on Steve’s papers. It is vast, covering continents, deeply reflective of his many contributions to understanding malaria and navigating solutions to prevent and treat it. But he also has studied other diseases, such as Hepatitis B. Speakers shared their experiences about how Steve connected them to his network, broadening their collaborations and horizons. That reflects a generosity that is notable. 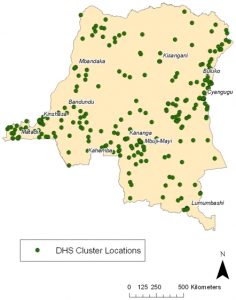 Geographic clusters from which households were selected for sampling in the DRC.

Steve did fundamental work on artemisinin, an important drug in the arsenal of malaria treatments. Steve’s malaria research most recently was concentrated in the Democratic Republic of the Congo (DRC), a country that has seen wars, famine, droughts, epidemics, and always, the endemic malaria. As part of this work, and with initial funding from a Gillings Innovation Lab award, he and his colleagues created new maps of disease prevalence using molecular epidemiology tools. His team included in-country people who gained skills and brought skills to the work. One speaker said it was the first time since the 1950s that the disease had been mapped there. Without the benefit of current maps, public health authorities would waste resources trying to eradicate the disease in parts of the country that might have low rates while paying insufficient attention to areas with higher rates of infection. The speaker said that in undertaking this project and gaining permission from country leaders, Steve contributed to improved relationships among countries. A paper published in PLoS One shows how they conducted the process.

Dr. Meshnick has aimed not only to discover but to turn discoveries into methods that can be used anywhere and become part of everyday life, like blood spots for mapping malaria and impregnated clothing to repel ticks. 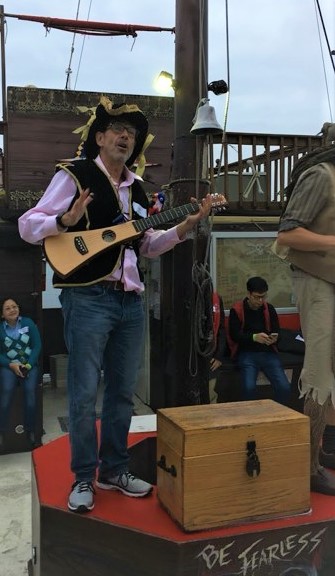 Some of the most effective faculty members and educators are great storytellers. Stories — and songs are stories — compel listeners to attend to the messages. They draw listeners in so that they, too, can experience the passion for learning and discovery that the professor feels. A few years ago, I learned that Dr. Meshnick was a professor by day and a talented musician and weaver of stories by night and weekend. Steve’s songs sum up the man so beautifully. There’s his love of teaching epidemiology and the history of the field—John Snow, Joseph Lister and other greats; his love of family in the songs he wrote for them, including a poignant song about cleaning the pool no one uses, the puppy and talking refrigerator, and more; his irreverent willingness to not take himself too seriously when he wrote about being rejected, disrespected and screwed. Who else could write songs that feature syphilis, diarrhea, and John Snow removing the handle of the Broad Street Pump? No one else but Steve Meshnick.

Steve, thank you for all you have done for your students, the field, UNC’s schools of medicine and public health, epidemiology department, people around the world and those close at home. You are one of a kind, the best kind.
Barbara